For Bemba.com we use the Twitter4R gem, which works like a charm. 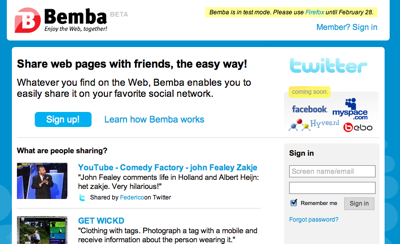 sharing web pages with friends in one click on several social networks at once!

Except we had some problems when we used the & character in our messages. It turned out that URI.encode was used for encoding and the text message was chopped off at the & character.

Now it is just a matter of submitting a patch for the gem, but although the specifications are all nicely written with RSpec, we’re not able to run the specs.

What are we doing wrong here….where is the spec helper?